A fairly thin free agent center market is about to get a notable addition as Mark Lazerus of The Athletic reports (Twitter link) that the Blackhawks will not be tendering Dylan Strome a qualifying offer by Monday’s deadline. That means he will become an unrestricted free agent on Monday. 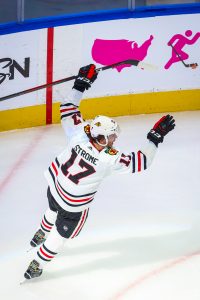 The move shouldn’t come as much surprise as Chicago has had the 25-year-old available for quite some time now with no takers. That’s more due to his cost than his performance, however. Strome’s qualifying offer of $3.6MM was more than what the Blackhawks were willing to pay and even if they were willing to go that high, the fact he had salary arbitration eligibility would almost certainly have pushed the price tag even higher which other teams around the league were certainly aware of.

Strome is coming off a bit of an up-and-down season. He got off to a tough start but over the final two months of the season, he averaged nearly a point per game in 28 contests while logging more than 20 minutes a night on the top line. Overall, he had 22 goals and 26 assists in 69 games, setting a new career-high in goals in the process.

For the criticism he has received over the past few years, the 2015 third-overall pick had a decent run overall in parts of four seasons with the Blackhawks, recording 60 goals and 94 assists in 225 games. While that type of production doesn’t quite live up to the draft billing, that’s still a solid performance for a secondary scorer. Between that and the fact it’s a thin center market, Strome should be able to generate considerable interest when the market opens up on Wednesday.

In the meantime, this will be the second center selected third overall to leave Chicago in less than a week after the Blackhawks moved Kirby Dash to Montreal back at the draft. GM Kyle Davidson is embarking on a full-scale rebuild and in a short stretch, the team is parting with a pair of young players who were viewed as potential long-term cogs just a couple of years ago.