The Stanley Cup champion Colorado Avalanche are retaining winger Valery Nichushkin with an eight-year extension. Nichushkin was one of the most valuable two-way wingers hitting unrestricted free agency this offseason. The Athletic’s Peter Baugh reports the contract is worth $49MM in total, or $6.125MM per season through 2029-30.

PuckPedia has the details of the massive extension for Nichushkin: 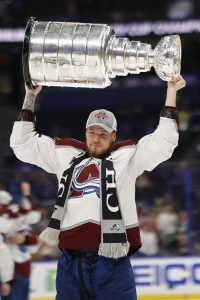 Nichushkin, 27, has spent the last three seasons in Colorado growing into one of the game’s most underrated commodities. Bought out by the Dallas Stars after a goalless 2018-19 season, the 2013 10th overall pick saw his defensive game get recognition with the Avalanche before finally exploding offensively in 2021-22. Nichushkin scored 25 goals and 27 assists for 52 points in 62 games this season, with all of those offensive numbers being career highs.

He’s received Selke Trophy votes each of the past three seasons, a true compliment to just how good he’s been on both sides of the puck since joining Colorado. He really just got a top-six role in earnest for the first time this season, though, averaging 19:02 per game. Nichushkin had never averaged above 15 minutes per night in his career. It’s one of the best career turnaround stories in the league, making the eight-year extension one of the feel-good stories of the offseason.

It’s a monster raise for Nichushkin, who was coming off a two-year deal with just a $2.5MM cap hit. If his 15 points in 20 playoff games is a sign that this level of production from him is sustainable over the next few years, he’ll be well worth the money — especially when considering his defensive prowess.

Next, Colorado and brand-new general manager Chris MacFarland will have to navigate what to do with Nazem Kadri and Andre Burakovsky. While Burakovsky is expected to hit the open market on Wednesday, the certainty of Nichushkin’s cap hit now allows Colorado to try and grind out an extension with Kadri. CapFriendly has Colorado with just under $15MM in projected cap space after the Nichushkin extension.

TSN’s Pierre LeBrun was first to report the extension.