Sean Kind: Throughout the “Should Chicago trade Alex DeBrincat” debate, I’ve kept the same basic stance. Was it embarrassing and sad that the Blackhawks were shopping a 24-year-old 40-goal guy? Yes. But that didn’t make it the wrong decision, either.

The reasoning was sound enough — Chicago’s roster is too far gone to save, thanks to a sweaty, desperate 2021 offseason by Stan Bowman that should’ve gotten him fired on merit. Moral failure did Bowman in, rather than signing Seth Jones, but the end result is unchanged. Because of him, Chicago was terrible without trying to be — which takes real effort in the NHL — and now it’s time to strip it to the studs.

DeBrincat, other than Patrick Kane, was new GM Kyle Davidson’s most valuable asset. It wasn’t a tough decision … just a big one. They’re not good and they won’t be for a while. Also, why would DeBrincat sign a new deal with them? Why would he sign up to spend his prime years in purgatory? He’ll be good five years from now. The Blackhawks, thanks to Bowman, will not be.

Anyway, here we are. DeBrincat is a Senator — not a Devil — and the Blackhawks turned a dollar into a quarter and two dimes. A return like this started to feel inevitable when we saw reports that New Jersey’s No. 2 pick wasn’t going to be enough for Chicago.

What’s so mind-boggling about this DeBrincat trade is how unnecessary it was. He didn’t want out. He wasn’t a problem. He’s signed for next year. He’s 24.

They were going for quantity, which rarely works out, and that’s what this return represents. I’m not a prospect guy; I do, however, know that “No. 2″ is better than “No. 7,” and that the value we can expect from the other two elements isn’t enough to move the meter. Ultimately, that’s why I hate this deal for the Blackhawks. We know the broad strokes of what they turned down, and it doesn’t look good. At all.

As for Ottawa? DeBrincat will fit alongside one of the better young cores in the league, and he represents something a little bigger than his stat line. The Sens are going for it, and that matters. I’m going to make two risky assumptions here — that DeBrincat signs an extension with the Sens, and that it’s nothing ridiculous. If that comes through? Big W for Pierre Dorion. What a time to be alive.

Why did the Blackhawks feel like they needed to trade Alex DeBrincat now? Why was the return smaller than most expected? What does this mean for the coming years? My column on Kyle Davidson’s bold move: https://t.co/UleA8iweSL

Dom Luszczyszyn: This is an extremely intriguing deal for both sides. It initially seemed odd that Chicago would even trade DeBrincat at all considering his age and ability — an overcorrection for last year’s Seth Jones disaster. But if the team recognizes it won’t be competitive to fit DeBrincat’s timeline, it makes sense to get maximum return at what may be the peak of his value. That’s especially true with one year left on his deal and a juicy $9 million qualifying offer waiting on the other side.

It’s the qualifying offer that makes things interesting for Ottawa because it doesn’t give the Senators much time to prove they’re a team worth sticking around for. There’s a real chance DeBrincat walks in two years and that’s the big risk here.

But it’s a risk that’s worth taking in terms of Ottawa’s current timeline. The Senators needed to make a big swing and get a real difference-maker that can move the needle in a substantial way in order to take the team to the next level. Away from the base. They can’t afford to get stuck. DeBrincat does that as one of the league’s premier goal scorers, having netted 41 goals last season. Only seven players are projected to score more goals than DeBrincat next season — though the absence of Patrick Kane might put a wrench in that expectation.

Whether this trade is worth it or not depends on how long DeBrincat stays in Ottawa. The total expected value of the three picks Ottawa traded—seventh, 39th and a 2024 third-round pick—equates to roughly 10 wins over the next seven seasons. DeBrincat is roughly worth three wins per season and should hit that 10-win target over the next four years. If he walks before then, the Senators aren’t getting their money’s worth here.

For Chicago, that calculus makes the deal more palatable under the assumption that DeBrincat wouldn’t have stayed for a lengthy and painful rebuild anyway. The Senators have had trouble retaining premium players in the past, but if the club can get back to their winning ways things might be different this time around. 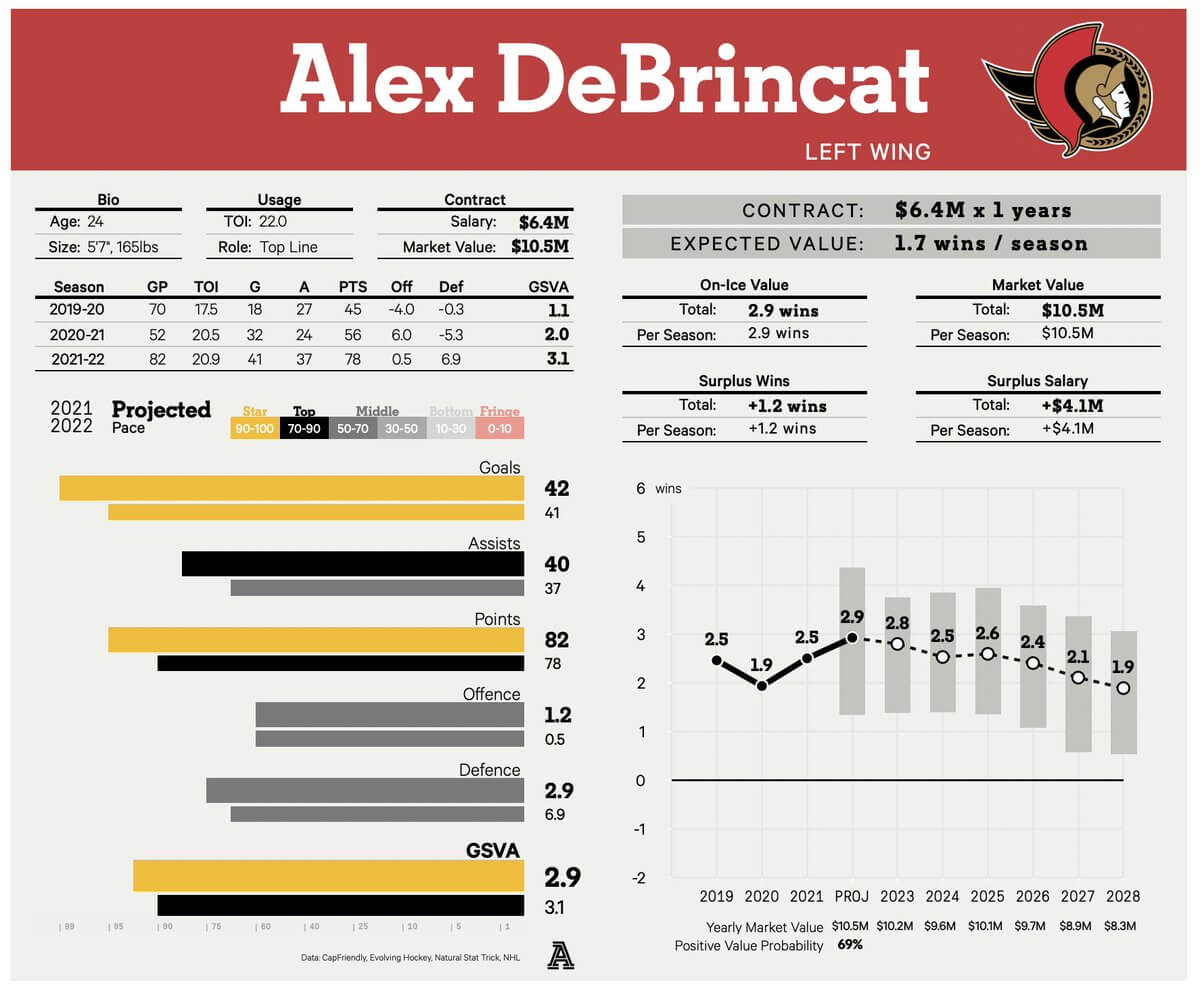 Corey Pronman: DeBrincat is a legit NHL star winger. He’s been a highly productive scorer. His skill and his hockey sense are high end, and he has a great shot. His skating for an undersized winger has never been his strong point but he competes hard and is so smart he overcomes those issues. His deal is up soon and he’s not far from being a free agent, but presuming Ottawa can extend him he becomes a core veteran piece that can help the organization take the next step out of this rebuild.

Chicago, on the other hand, is all in and just beginning its rebuilding. We’ll see who they draft with the picks. The No. 7 pick, especially, should net them a quality top-six forward or top-four defenseman down the line.

Chicago gets the future assets they need but this hurts and speaks volumes to a lengthy, painful rebuild ahead — especially getting only one true premium asset in this deal.