TORONTO—Things may be starting to look strange around here.

On Saturday night, a 4-0 Winnipeg Blue Bombers team will put its unbeaten record on the line with five of the six CFL.ca writers picking against them.

Perhaps you see that and your mind races to the obvious questions. Did these five writers discover time travel in the year 2013, jump nine years into the future and look at this week’s matches without the proper context? Was this week’s graphic intercepted (perhaps by TJ Lee or Garry Peters) then hacked by the good people at BCLions.com before it was published? Were the writers bought off by a well-funded and ambitious pack of Roughriders fans that are after a nice early season troll job on their Banjo Bowl rivals?

The answers to these questions are as follows: No, no and emphatically no; the writers’ integrity is not for sale, though some may be willing to tattoo a site’s address on their foreheads for money (remember when that was a thing?)

What’s actually happening here is quite significant. The Bombers and Lions are a combined 7-0 this season and meet for a top-of-the-heap showdown on Saturday to close out a quickie of a Week 5 schedule.

The Lions have been so impressive out of the gate this season that the panel of writers (save for tied-for-first-place Pat Steinberg) is convinced that the Lions will protect BC Place against the undefeated, two-time defending Gray Cup champions . That the Bombers are coming across the country on a short week, after eking out a win against the Argos in Toronto on Monday night may also have factored into that decision. We’ll look at this a little more closely below. 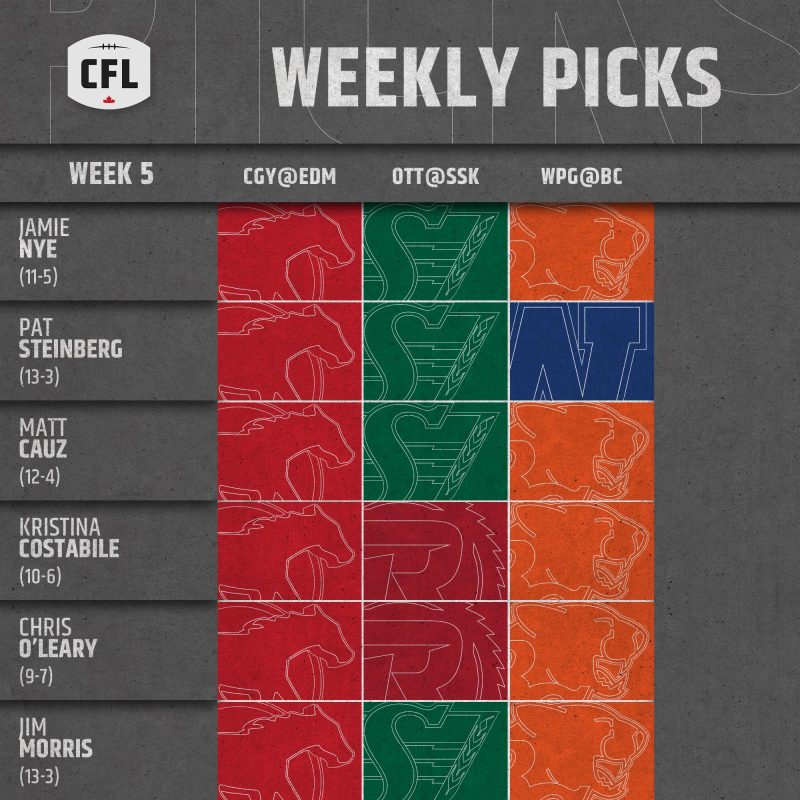 The Elks have been steadily improving each week and after giving the Stamps a run in Week 3, should be a tough foe for them in their rematch on Thursday in Edmonton. The advantage should sit with the rested Calgary team, though. Tre Ford will have to be sharp against the Stamps’ defence, while Bo Levi Mitchell will be looking to get his team back to first quarter productivity. The Stamps’ comeback wins have been impressive but it’s not the way to build a winning season and they know that.

Which teams will show up at Mosaic Stadium on Friday? If it’s the light-it-up offense of the Ottawa REDBLACKS, they’ll have a shot at picking up their first win of the season. If it’s the turnover-hungry, stop-you-in-your-tracks Roughriders’ defense that we saw last week against Montreal, with a sprinkle or two or three of a productive Riders’ offense, the fans at Mosaic will start to believe that they’ve got a force of a team playing in front of them. The majority of the panel thinks the home team stays undefeated this season.

In a blessing from the scheduling gods, the final game of the week feels like the main event of the season so far. Sure, the Bombers might be a little road weary but they provide the ultimate measuring stick for a Lions team that everyone has been trying to gauge since they opened their season with that blowout win over Edmonton. On the other side of the matchup, this will be a tremendous test for the Bombers’ defence, which has been uncharacteristically generous in three games this season while still doing enough to stand at a league-leading 4-0. Clear your calendar and line up a meal delivery for the 7 pm ET kickoff. Saturday will be a fun one.