The Red Wings got a head start on the NHL free-agent market late last week, trading for and extending goaltender Ville Husso to complete their tandem in net. But with the opening bell for the frenzy now just over 36 hours away, Detroit GM Steve Yzerman still has big needs to fill up and down the lineup.

The biggest of those needs is on defense, with Danny DeKeyser and Marc Staal both on expiring contracts. But the closer we get to Wednesday, the center market is getting awfully interesting as well, with 2015 No. 3 pick Dylan Strome not receiving a qualifying offer in Chicago, and the Penguins’ Evgeni Malkin now trending toward the open market as well.

So, which targets are the most natural fits in Detroit, as the Red Wings look to round the corner in their rebuild? Here are the top 10:

Technically speaking, Palat does not fill one of Detroit’s top positions of need this summer: left defense or center. But in terms of his overall impact, play style and the likely term he will command, he’s as close to a perfect fit as it gets for the Red Wings. And even though Detroit doesn’t have a glaring hole on the wing, Palat would still represent a clear upgrade in the team’s top-six and could be a perfect match opposite either Jakub Vrana or Lucas Raymond as a gritty, winning player who brings value at both ends.

He would also be a natural conduit between the players and new head coach Derek Lalonde — under whom Palat won two Stanley Cups and went to three finals. Having a player who has worked with Lalonde—and thrived while doing so—would be an asset as he looks to instill his message with a new group.

Even what might be considered the only downside on Palat — his age, at 31 — could turn out to be a positive, if it means he’s willing to accept a shorter-term deal in the three-to-four-year range. Detroit has the cap space to make a highly competitive offer on a deal of that length. Evolving Hockey projects a three-year, $5.56 million deal, but even $6 million at the term would be more than manageable for the Red Wings.

There might not be another free agency fit that would make this much sense and this big year impact for Detroit. 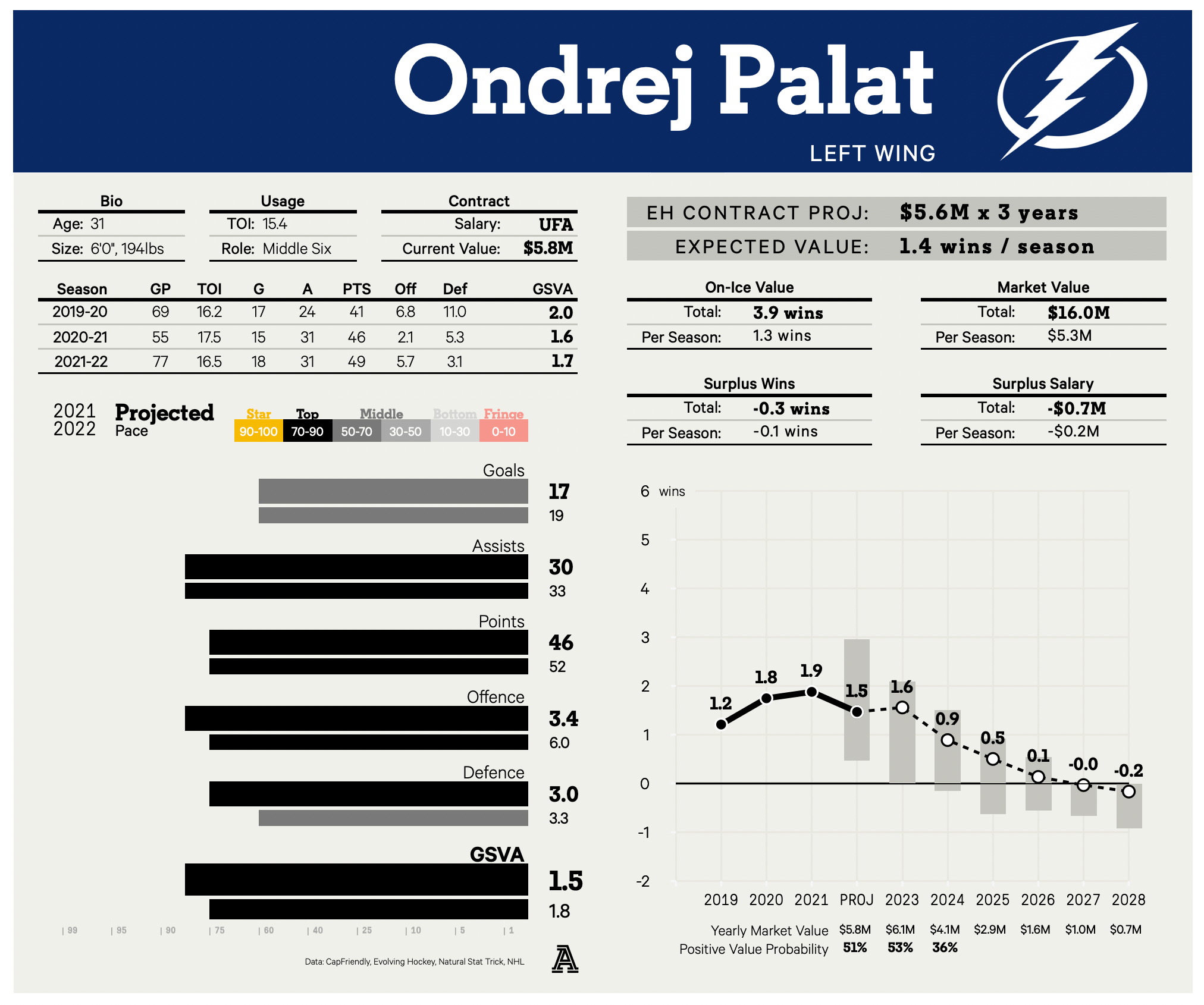 Up until recently, it was very hard to envision Malkin — a future first-ballot Hall of Famer and a legacy player in Pittsburgh — actually getting to free agency. And yet, less than two days out, things have gotten ugly, and it looks increasingly like he will test the market. Could Detroit be his destination?

The Red Wings can’t offer Malkin instant Stanley Cup contention as some other possible suitors can. They can, however, offer a chance to play for a historic franchise — one that was known for its iconic “Russian Five” during Malkin’s childhood in the 1990s. They also have plenty of cap space, and a glaring need down the middle. Malkin could play with another high-end offensive thinker, whether it be Raymond or Vrana, and, of course, get prime power-play opportunities.

Malkin was still a point-per-game player last season at age 35, and, if healthy, might be the highest-impact add Detroit could make down the middle. He also has the winning pedigree Detroit has seemed to covet under Yzerman.

The big question, for me, comes down to term for the soon-to-be 36-year-old. The Athletic‘s Rob Rossi reported over the weekend the Penguins’ offer to Malkin had been three years at $6 million annually, indicating a fourth year at that salary could get a deal done. Reporting from Josh Yohe on Monday reinforced that the difference between three and four years is the key.

For a player of his age, with Malkin’s injury history, it is a critical distinction — and could very well be for Detroit as well, as they look to turn the corner in their rebuild. Would a three-year deal at a higher AAV suffice instead? The Malkin saga is probably the most fascinating situation to watch as free agency takes shape. 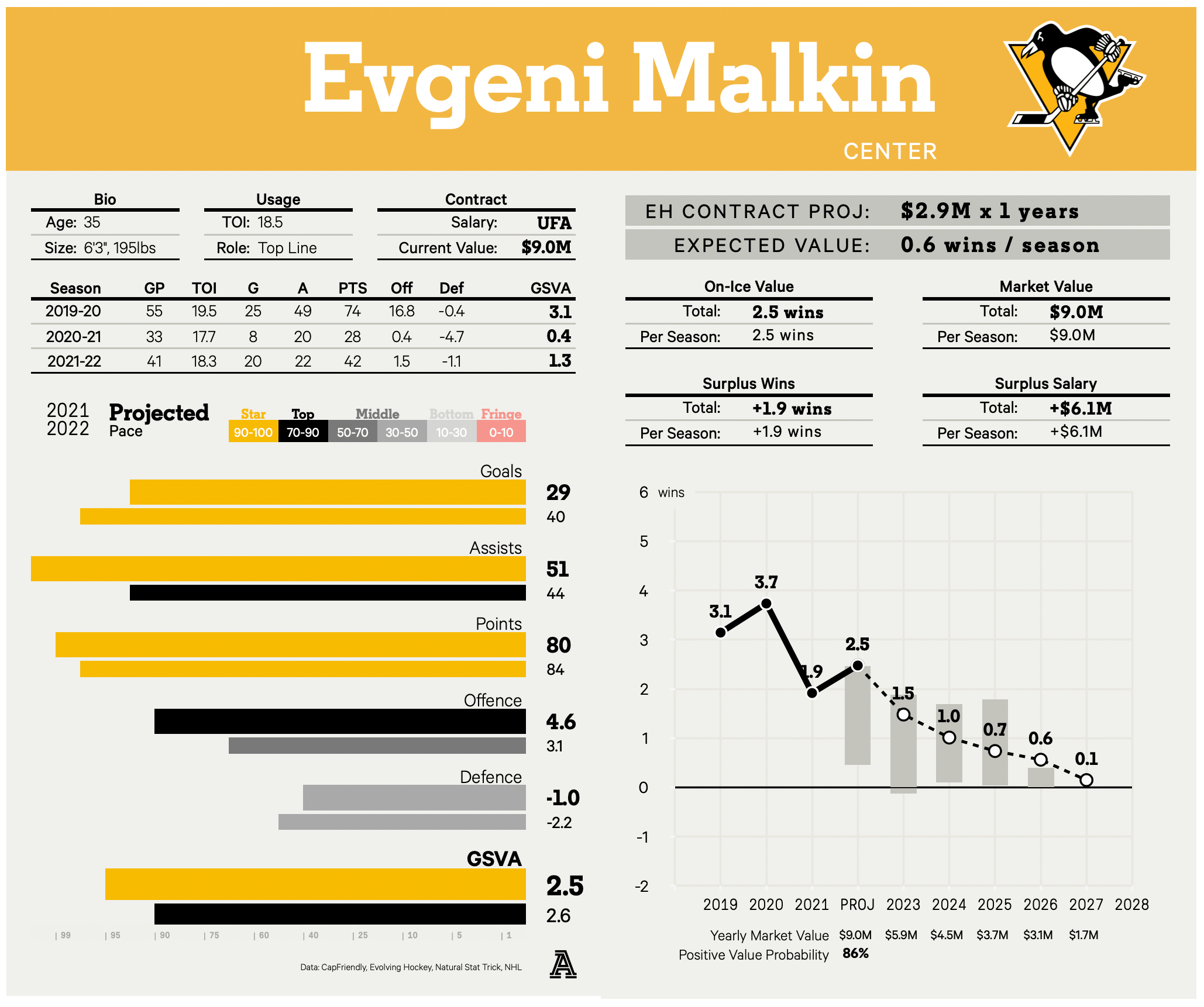 The local product is coming off an excellent run with the Rangers, scoring over a point per game in New York’s final 16 regular-season games, then adding 14 in 20 in the playoffs.

That’s a great way to go into free agency, and also the main reason for caution before getting too excited here: That performance might have given the 28-year-old enough ammo to command a long-term deal, which could eliminate his hometown team from contention. Detroit hasn’t given out any contracts longer than four years under Yzerman.

Still, Copp is a big-bodied center who just put up 20 goals, proved he can score in the playoffs, and has historically strong defensive impacts. That checks a ton of boxes for Detroit, and the local tie is a good reason to believe he’d entertain a return home.

Copp would be well within his rights to fully capitalize on his career year and secure his financial future this summer. But if he’s willing to sign on a medium-term deal to return home, he’s an obvious fit. Evolving Hockey projects a four-year deal at about $5.8 million, which feels manageable for the Red Wings. 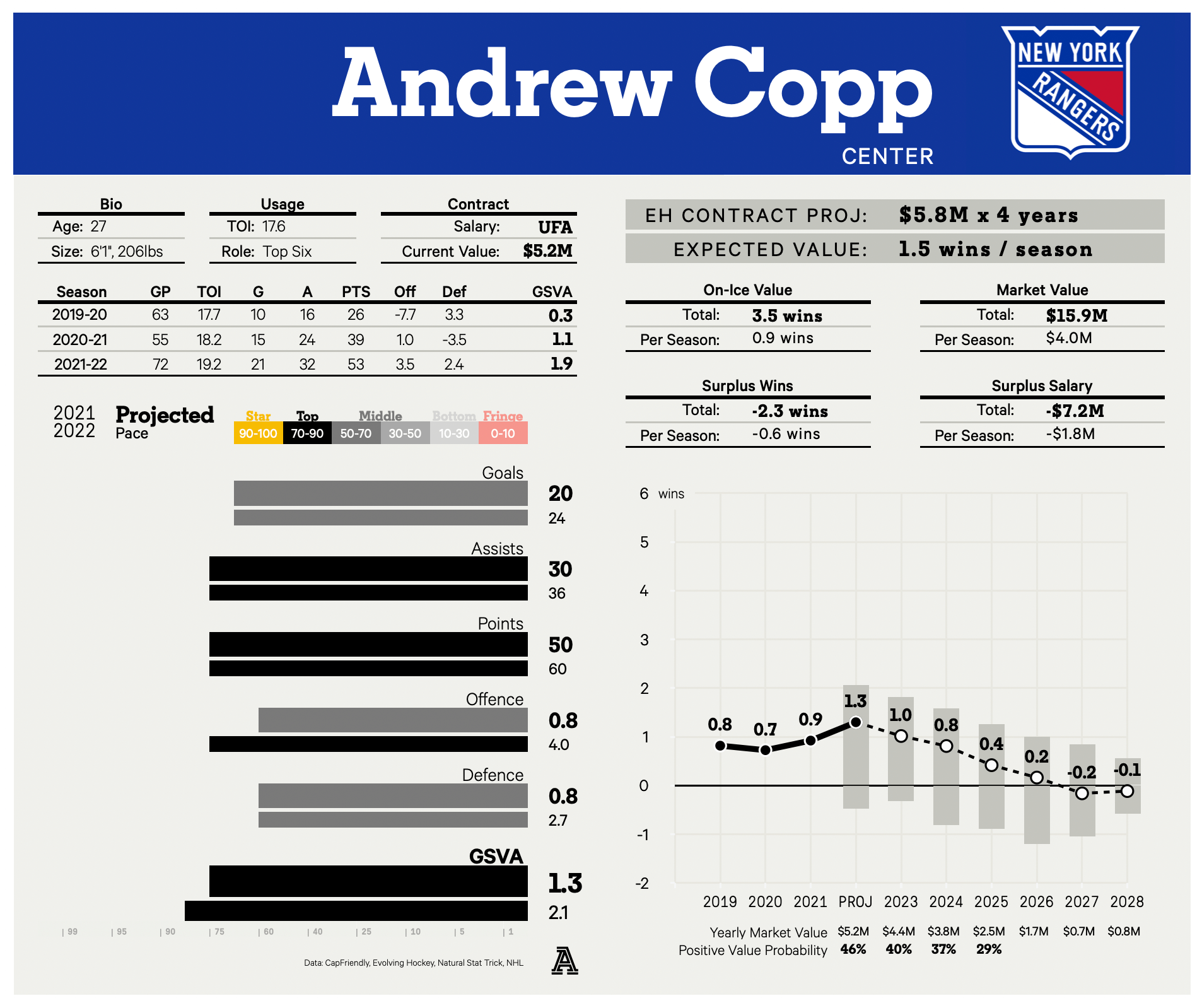 In addition to the need at second-line center, it’s no secret the Red Wings have to improve their team defense this summer. Part of that, Detroit hopes, will come from the new voice behind the bench. But a large portion has to come by upgrading the roster, and Trocheck would accomplish that — slotting in as a 50-point second-line centerman who was just a big piece of the league’s best power play.

He has the compete-level Detroit wants to foster, the two-way habits and impacts, and at 29 has a decent chance of delivering value on a medium-term deal. Evolving Hockey projects him to sign a four-year deal worth about $6 million — similar to Copp, and similarly doable.

One problem? If Malkin does leave the Penguins, then the Pittsburgh-native Trocheck might quickly become the top option to replace him. 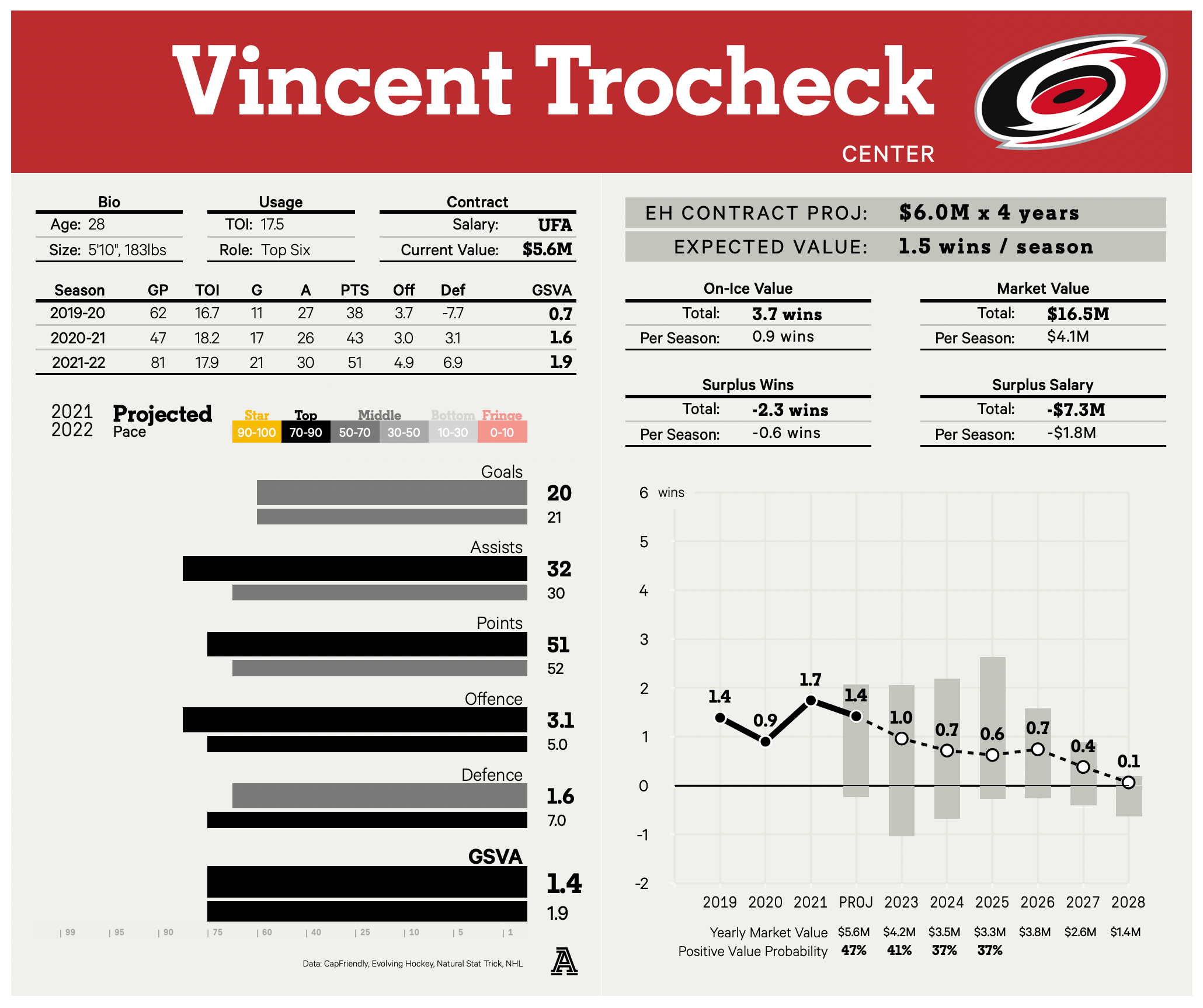 The No. 3 pick in the 2015 NHL Draft, Strome is 25 and coming off a 48-point season. He already has three NHL campaigns at that number or better, and he’s younger than typical free-agent age.

So, how’s he here? The Blackhawks opted not to qualify the would-be-RFA as they continue to purge their roster, part of a seismic teardown that’s also seen them trade Alex DeBrincat and Kirby Dach. Could the Red Wings swoop in for the second year in a row, just as they did with Pius Suter last offseason?

Strome certainly benefitted from playing with Patrick Kane and DeBrincat, but Detroit has some young scorers he could pair him with too, and his age at 25 is unmatched on this year’s open market. Evolving Hockey projects a three-year deal at $4.6 million, which would make Strome a natural bridge to 2022 first-round pick Marco Kasper.

Like Palat, Niederreiter is here despite not playing the highest-need position, but his impacts justify inclusion nonetheless. He was a 44-point player (with 24 goals) last season despite getting less than 15 minutes of ice time per night, and he would bring a needed size element to Detroit’s top six at 6-foot-2.

The question, as with Copp, is term. Evolving Hockey projects the soon-to-be 30-year-old to receive a seven-year deal at $5.7 million this summer, which would likely be a no-go for Detroit. But if he were willing to sign for more like four years, he could certainly help the Red Wings establish a heavier forecheck while offering plenty of finish. 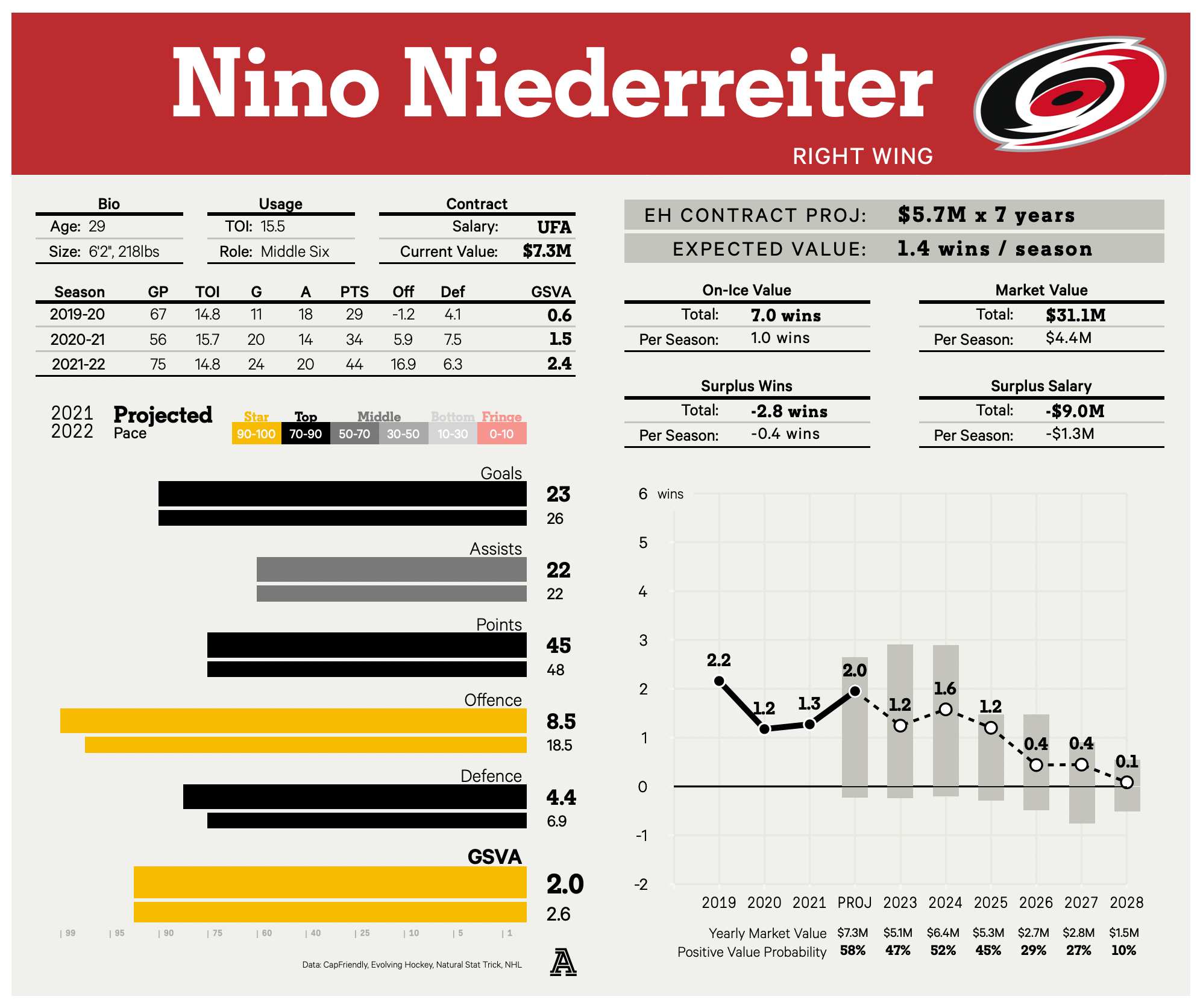 Admittedly, a left-shot ‘D’ should likely be higher on this list than seventh, as it’s the one position the Red Wings absolutely cannot go into next season without addressing.

But the LHD market this year is far from inspiring, with the biggest names being Ben Chiarot and Nikita Zadorov, both of whom will likely be able to command a kind of term that won’t make sense for Detroit, with several young LHD on the way. Top prospect Simon Edvinsson has a good chance to make the team this year, but even beyond him, Detroit has a deep pool — including Albert Johansson, Shai Buium, William Wallinder, Jared McIsaac, Donovan Sebrango and Eemil Viro — that could very well produce multiple quality NHL players.

Long term, that’s a great thing. Short term, it means locking into a four- or five-year term is probably inadvisable.

So, thinking short, where could Detroit go to help find some defensive stoppers? Cole’s a natural place to start, as a local product turning in strong defensive impacts in Carolina, with plenty of experience on winning teams. Evolving Hockey projects a two-year contract at $2.6 million, which would be perfect for the Red Wings.

The only question is how high in the lineup he can reasonably play, after averaging third-pair minutes for each of the last three seasons.

Edler’s a bit older at 36, but he at least played a bit bigger role in LA this past season, helping the Kings take a similar kind of step as the Red Wings would like to. He’s got the rangy build Detroit has gravitated toward in defensemen, though his pedigree has more to do with his offensive game.

Regardless, he’d be a tremendous mentor for Edvinsson and Moritz Seider — perhaps the best one available — and a one- or two-year deal would make plenty of sense for Detroit. 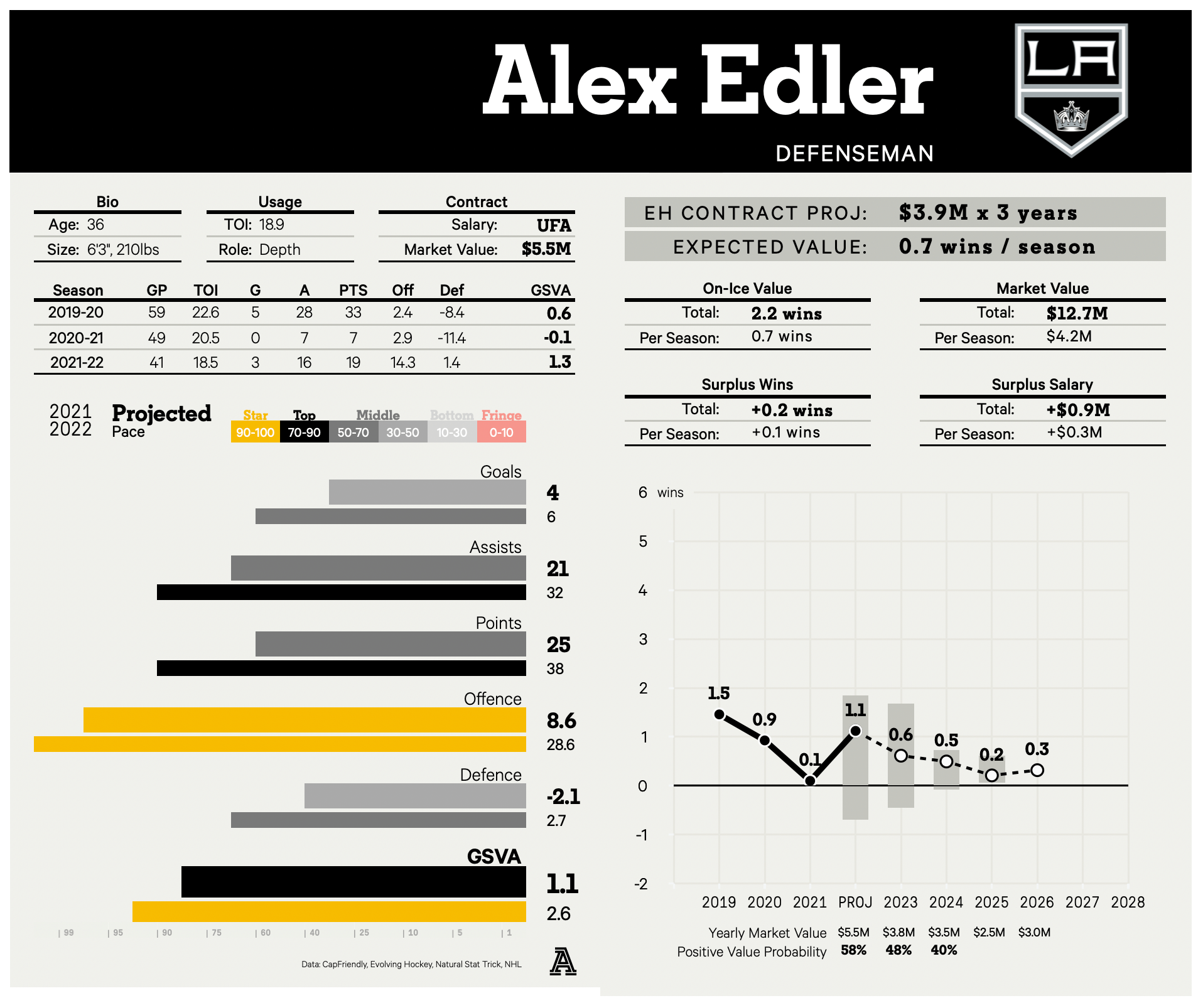 Now, how about Edler’s Kings teammate? Maatta is soon-to-be 28, and while he doesn’t have Edler’s individual pedigree, he’s been part of two Cup teams plus the Kings’ turnaround, and had an expected goals share of nearly 53 percent last season. The four-year term at $3.1 million AAV Evolving Hockey projects is a bit longer than ideal, but the options are so thin this year that Detroit might have to consider it.

Kulak could end up back in Edmonton after Duncan Keith’s retirement. But if he makes it to market, he’s an analytics darling — after the trade to Edmonton, his expected goals share was 57 percent. Certainly, it’s fair to wonder if he can keep up the offensive side of that equation away from one of the league’s most electric teams, but he was north of 52 percent xGF% three straight seasons in Montreal prior to 2021-22 — often via excellent defensive numbers.

He’s never averaged 18 minutes a night, which is a concern as Detroit needs top-four help above all. But for the kind of term the Red Wings figure to be comfortable with, that’s going to be very hard to find in free agency.

This isn’t a trade or offer-sheets target list, but both Vegas’ Nicolas Hague and the Penguins’ Marcus Pettersson might be more natural fits, with Pettersson’s appeal coming more from his 21-minute role in the playoffs than his sub-16 minute one in the regular season.

A bonus one from the non-QO department is Kubalik. He’s not the caliber player of Palat or Niederreiter, and his 30-goal rookie season in 2019-20 looks increasingly like a shooting-percentage-induced anomaly. But even then, Kubalik is a 26-year-old who has scored 17 and 15 goals in the last two seasons, respectively, and is at least worth consideration.

In the end, Detroit’s probably better off passing in favor of a top-nine job for Filip Zadina or Jonatan Berggren. But Steve Yzerman hasn’t cleared lineup paths for any prospects in the past, and if the Red Wings’ pro scouts like Kubalik, there’s enough pure scoring here to justify something short-term.