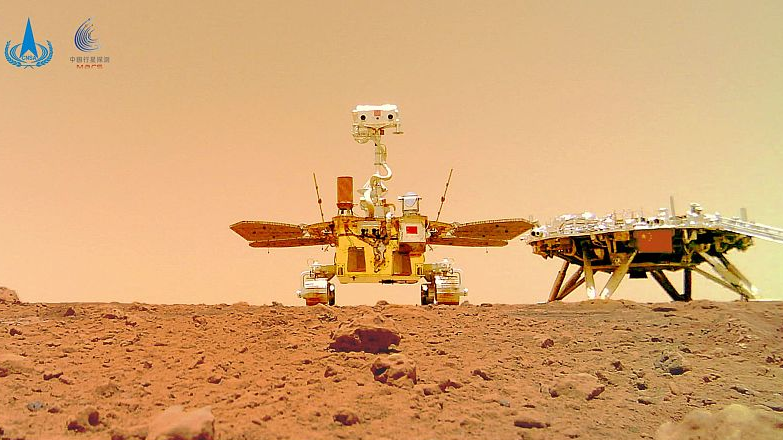 The image taken by a camera released from China’s Zhurong Mars rover showing the rover (L) and the landing platform on the surface of Mars, June 11, 2021. /CFP

The image taken by a camera released from China’s Zhurong Mars rover showing the rover (L) and the landing platform on the surface of Mars, June 11, 2021. /CFP

New material has been maintaining high stability of the rover Zhurong on China’s Tianwen-1 probe, according to the Institute of Metal Research of the Chinese Academy of Sciences.

The researchers from the institute developed the wheels on the rover. The novel material of the wheels is an aluminum matrix silicon carbide composite. Its plasticity was apparently enhanced, with high strength, resistance and stability.

The reliability of the novel material was proved by the complex conditions on the surface of Mars, said Ma Zongyi, a researcher with the institute.

The researchers have also developed more than 50 types of components such as driving systems and detectors for Zhurong.

As of June 29, the orbiter of the Tianwen-1 probe has been operating normally for 706 days. It has acquired medium-resolution image data covering the whole globe of Mars, according to the China National Space Administration.

The Tianwen-1 probe consists of an orbiter, a lander, and the rover Zhurong. On May 15, 2021, it touched down at its pre-selected landing area in Utopia Planitia, a vast Martian plain, marking the first time that China has landed a probe on the planet.

The rover Zhurong started patrolling Mars on May 22, 2021. As of August 15, 2021, Zhurong had finished the designed 90-Martian-day mission and continued to work for further exploration.

Having traveled around 1,921.5 meters on the surface of Mars, on May 18, 2022, Zhurong switched to the dormant mode due to the chilly winter and dusty weather on the red planet. It will resume operations around this December when the working conditions get better.